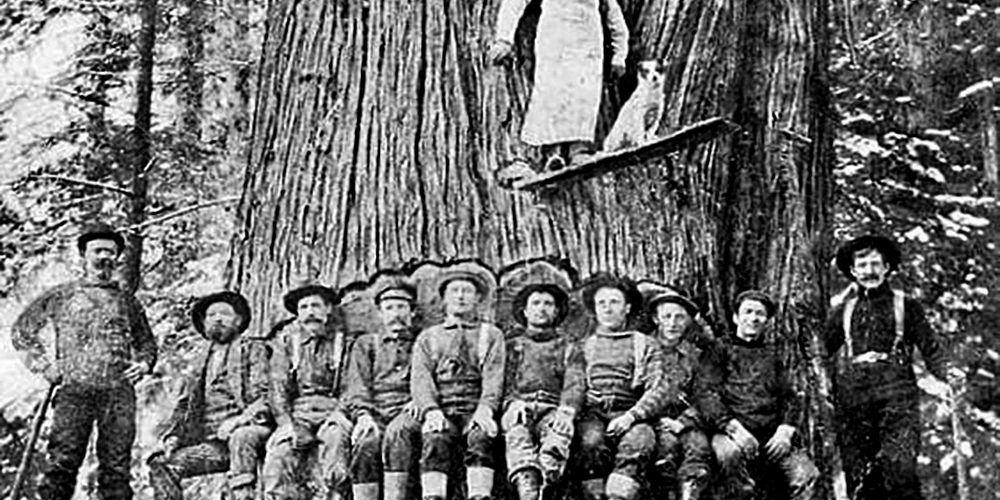 When the first Europeans arrived on the Pacific Northwest Coast in the 18th century they encountered a magnificent rain forest, the result of favorable soil conditions and moisture-laden ocean winds. For centuries, the Indians of the region had used western red cedar in the construction of houses, canoes and a range of other items. British sailors, including Captain James Cook, also recognized the value of timber. History records that Cook’s men cut logs for masts and spars on Vancouver Island in 1778. Ten years later, fur trader John Meares took a load of furs and spars to China, a delivery that marked the first European timber trading venture.

Since the 19th century, the Douglas fir, named for botanist David Douglas, has been the mainstay of the West Coast forest industry. In 1848, the Hudson’s Bay Co. established a small mill at Fort Victoria, site of present day Victoria, where timber was cut into lumber and shipped to markets in San Francisco, Calif., and Hawaii. The first real export mill was opened at Alberni, B.C., in 1861 by industrialist Edward Stamp. However, Stamp’s business venture here was short-lived because of local timber depletion and competition from mills situated on Puget Sound in American territory.

By the time B.C. entered Confederation in 1871, Stamp and Sewell P. Moody had established large logging camps and cargo mills on the shores of Burrard Inlet where Vancouver now sits. It was these mills that gave rise to lumbering as a prominent industry in B.C.

As the West Coast timber industry developed, it became obvious that a number of logging techniques used east of the Rockies were not going to work on the West Coast where loggers encountered enormous timber–some 60 metres high–and very rough terrain. Loggers west of the Rockies also had to contend with turbulent coastal rivers.

From these thick, moist forests only the finest timber was selected for removal. However, some of the best trees survived the axe because they were impossible to get at. In Eastern Canada, loggers hauled or “skidded” logs out of the forest on snow-covered roads. This technique could not be used on the West Coast because there was no snow with the milder coastal climate. The solution was to build “skid roads” out of logs.

The construction of the Canadian Pacific Railway in the 1880s created more demand for B.C. timber because it provided a transportation link to eastern markets. The double-bitted axe came into use during the 1870s, followed a decade later by the two-man crosscut saw. Men–known as “fallers”–worked in pairs with each man standing on a springboard. These small planks were inserted on opposite sides of the tree just above the flare of the trunk. Using the two-man crosscut the fallers would saw in the under-cut and then chop out a wedge to determine the direction of the tree’s fall. They would then saw from the other side of the tree and scramble off the springboards when the tree began its descent.

Workers, known as “buckers”, would saw the fallen tree into sections. The jobs of the faller and the bucker were–and remain–dangerous. Without the proper skill and judgment, a man could get seriously hurt or killed. Incompetence could also lead to wasted timber and lost profit.

Before the logs were hauled out of the forest, axe men bevelled or “sniped” the lead end of a log. This involved the removal of any tree bark and knots that could hinder a log as it was pulled out of the woods. Other workers, known as “swampers”, were responsible for clearing a path to the skid road.

Lumbering on the West Coast depended heavily on horses and oxen to haul the logs out of the forest. The job of negotiating the log’s passage along a path to the skid road demanded great skill from the “hooktender” and the “teamster”. The hooktender’s job was to attach a complex arrangement of cables and blocks from the animals to the log. He would use any adjacent trees or stumps in order to gain power and manoeuvrability. And so it goes without saying that the job was easier for those men who had an understanding of common physics. The teamster, meanwhile, was responsible for driving the animals and the load out of the woods.

After the logs were hauled out to the skid road, they were coupled with chains and attached–with a cable–to a second team of animals. The heavy load or “turn” was then hauled to the water’s edge.

Towards the end of the 19th century, forest depletion in the timber regions of Eastern Canada prompted resource capitalists to seek new timber supplies elsewhere. Attractive tenure policies drew speculators and lumbermen to B.C. and this created a frenzy of timber acquisition. This new economic order called for mass production methods that soon saw the teamsters and their animals banished to the industry’s margins.

Logging’s industrial revolution began in the 1890s when the first steam-powered engine or “donkey” engine was introduced from the United States. A wire or cable was extended from the donkey to the logs where the hooktender supervised the rigging. When everything was set, an engineer engaged the machine and the logs were pulled in. Donkey engines could drag logs up to 150 metres and this made it easier for West Coast loggers to compete with lumbermen who worked in places where the terrain wasn’t as rough. But while the machine helped to accelerate the logger’s work, it also introduced new frustration and more danger because stumps and timber not worth the trouble of falling presented obstacles that called for a high degree of skill from the hooktender. The danger stemmed from the fact that the power generated by the larger donkey engines was enough to snap the rigging or the cable when a log got caught on an obstacle.

As logging companies moved further inland from the coast, logging railroads were built. The cost of building and operating these lines encouraged the development of larger operations to achieve economies of scale. But while the size of the logging camps grew, the living conditions for loggers remained primitive. Crude bunkhouses, equipped with double-decker bunks, slept 50 men. The ventilation in the houses was poor and the washing facilities–if they existed–were inappropriate. Overall, the atmosphere was dirty and pungent.

What made matters worse was the fact that many operators threw the burden of the competitive and unpredictable lumber economy on to the backs of workers; loggers worked harder, but received less pay when lumber prices fell. Gradually, loggers asserted their independence by quitting or alternating bouts of strenuous labor with periods of rest and entertainment in Vancouver.

The years between 1900 and the end of WW I witnessed a dramatic development in timber harvesting methods. It was during this time when the overhead skidder and the less elaborate high-lead system were introduced to West Coast logging. By extending a hauling line through a block stationed on top of a spar tree, companies could haul the timber out by partially suspending it above the ground. As this practice continued, logging operations resembled giant factories without roofs. And so it wasn’t long before there was a shift from selective logging to clear-cut logging.

A boom in new home construction during the late ‘40s, ‘50s and ‘60s produced record timber cuts and high employment for the province’s timber industry. Industry giants such as MacMillan Bloedel Ltd., Crown Zellerbach, BC Forest Products and Rayonier came to dominate the industry. These companies controlled vast holdings that fed sawmills and newly constructed pulp and paper plants. Also during the postwar period, government policies helped these giant firms consolidate control over the resource. This has generated resentment among small operators who argue that tree farm licence tenures favor large corporations. However, the government-industry partnership in sustained yield forestry seemed to herald an era of stability for timber-dependent communities.

The Campbell River Nursery, now owned and operated by Pacific Regeneration Technologies Ltd., continues to provide up to 15 million seedlings each year for reforestation programs. In 1980, Sylvan Vale Nursery started in the Black Creek area and now produces more than seven million seedlings per year.

What started out as an experimental program with the planting of 8,000 seedlings in Beaver Lodge Forest Lands in 1931 has become a program where an average of 218 million trees are planted throughout the province each year.

In 1981, the province planted its one billionth tree. On May 29, 1997 the four billionth tree, a Douglas fir, was planted by Premier Glen Clark and the other western Canada premiers on the grounds of the Campbell River Museum.

Today, the number of trees planted has more than doubled again. The reforestation history in B.C. has come a long way from its infancy in the 1920s. It has evolved into what today is recognized as a world-class program of quality seedling and reforestation standard.

Drop by the Chilliwack site, request a free quote or call 1-604-703-3452 to speak directly to Markus and he will walk you through the options available to you, whether it is residential, commercial, renovations or custom floor plans, begin the journey towards your wood-based home today.